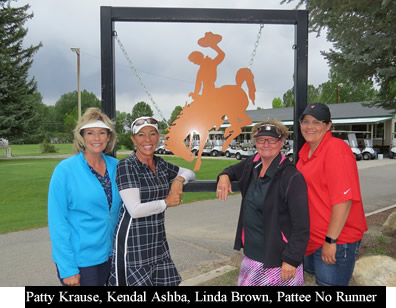 The Team of Kendall Ashba, Pattee No Runner, Patty Krause, and Linda Brown were the winners of the Gross/Net Best Ball Total of 267 or -21. In second place, with a score of 276 or -12, was the Team of Leann Dunlap, Donna Brown, Tara Robinson,and Donna Lozier.
Winning the Best Two Net Best Ball Division was the Team of Monica Schambaugh, Sandy Huckfeldt, Connie Booth, and Terry Espinoza with Total Net of 238. Congratulations, also, to the flight winners!

There was one gross skin won over the weekend, won by James Weck with an eagle on 15.

There were two net skins won over the weekend, with both Janice Vosika and Brett Evans netting a one on separate par threes.

The tournament was a great success, and thanks to Mike Keith and his crew, Danielle Bynon and her crew, Blake and Barb Snyder, Janet Coupens and the rest of our crew and to all who played. We already can’t wait for next year!!

Kyler Dunkle and Blake Tomlinson won the Pro-Pro/Pro-Scratch/Scratch/Scratch Tournament with back-to-back scores of 61 to finish at -22.  Zac Blair and Dan Horner finished second with rounds of 65, 64 or – 15.